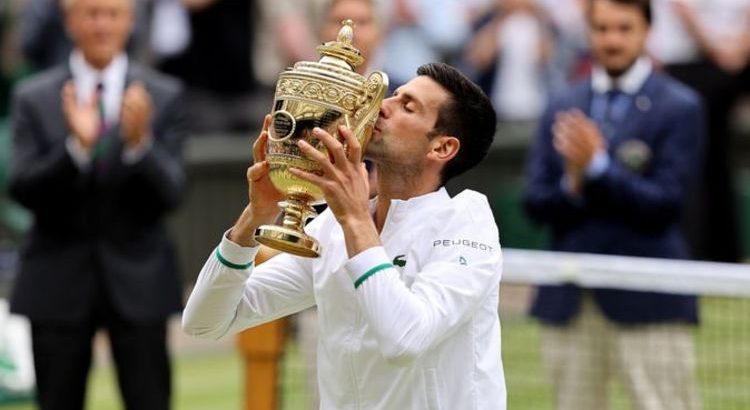 The 1987 Wimbledon winner Pat Cash believes Novak Djokovic should focus entirely on trying to be the first male player in the Open Era to achieve a Calendar Slam. In women’s tennis Steffi Graf achieved the feat in 1988, and no-one has replicated that achievement ever since. No man ever has won all four Grand Slams in the same year.

Djokovic has a real chance at history and, at 34, he is still arguably at the height of his prime, and no-one really looks close to challenging him.

With Roger Federer and Rafa Nadal dropping off the pace this year, and with the former rumoured to be retiring soon, there isn’t another player that looks like a challenge to Djokovic.

Cash told L’Equipe: “Well for Novak, I think this year is a great opportunity for him to grab a bunch of Grand Slams and grab all the titles,

“Certainly Wimbledon – without disrespecting the other players – was one of the weaker men’s side draws that I’ve seen in many, many years.

“And that’s because we’ve got two of the big stars are coming back from injuries – Andy Murray and Roger Federer – who played well but weren’t at the peak of their career.

JUST IN: Roger Federer ruled out of Tokyo Olympics after Wimbledon knee injury

“The younger players are coming through, but they’re not quite there yet. And Novak is just sitting on top of that mountain as the king of the castle.

“And so this is the year that Novak can really grab the impossible dream – you know it really is, it’s there. The Olympics – okay, maybe he wants to do that.

Djokovic just needs the US Open this year for the Calendar Slam, however he could go one further and add a gold medal at the Olympics too, something he’s never won.

The Serbian world No 1 is currently undecided on playing in Japan this summer, with preparations for Flushing Meadows obviously his number one priority.

He recently equalled Federer and Nadal’s record of 20 Grand Slam titles and doesn’t look like slowing down any time soon.

Many predict he will go on to better both the Swiss maestro’s and Spanish clay-court specialist’s achievements and it remains only a matter of time that he overtakes them for most Slams.

Two of the greatest ever, Federer and Nadal, have never achieved the Calendar Slam, which really puts into perspective how incredibly difficult this feat is.

Djokovic, admittedly, does not command a fan base as large or as devoted as his two career rivals.

However, winning the Calendar Slam will surely cement his place as the greatest of all time, and fans should respect that.