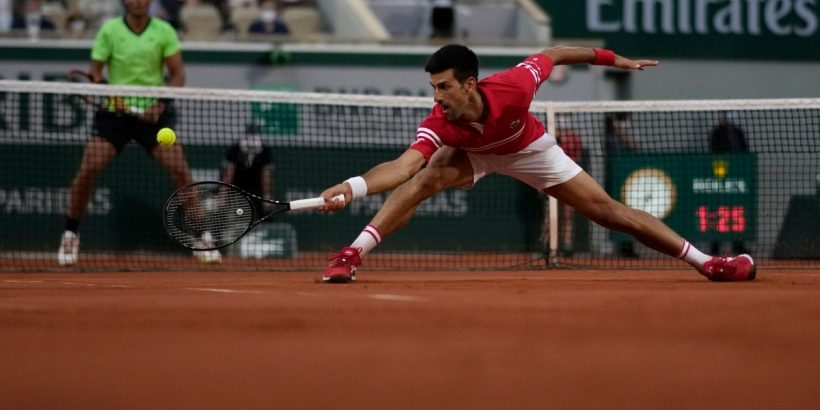 Novak Djokovic stretches for a backhand with Rafael Nadal watching

Novak Djokovic will take on Stefanos Tsitsipas in the men’s singles final at the French Open today.

Djokovic defeated Rafael Nadal in a rematch of last year’s final to set up a clash with Tsitsipas, who beat Alexander Zverev in a thrilling clash earlier in the afternoon. It is an intriguing match to decide the winner of the 2021 trophy at Roland Garros, as Tsitsipas has never won a Grand Slam before while Djokovic are chasing history to become the all-time Grand Slam leader.

World No 1 Djokovic will fancy his chances of moving just one Grand Slam victory behind both Roger Federer and Nadal after he beat the Spaniard. The Serb, who claimed his 18th major title earlier this year at the Australian Open, has only won the French Open once in his illustrious career, back in 2016.

In the earlier semi-final, Tsitsipas needed five epic sets to see off the German Zverev.

Here’s everything you need to know about the French Open final today.

The match will start at 2pm BST.

In the UK, coverage can be found on ITV 4. Eurosport will also air the match, with NBC showing it in the US.

Djokovic to win in three sets and close in on Federer and Nadal’s 20 grand slams.