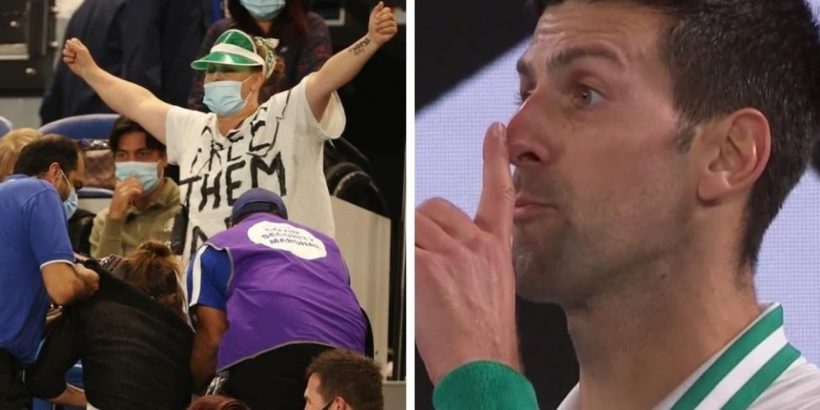 The Australian Open men’s final between Novak Djokovic and Daniil Medvedev was interrupted by protesters yelling from the stands of Rod Laver Arena on Sunday evening.

Play was stopped mid-point with Medvedev up 30-15 on serve at 1-2 in the second set as spectators started yelling as part of a protest, forcing the umpire to call let and have the point replayed.

Djokovic was visibly upset by the ordeal, but security quickly ejected the demonstrators from the venue.

Images showed one of the protesters donned a shirt which read “end systemic racism” on the back.

According to reports, the protesters were yelling “free the refugees”, and appeared to resist officials as they were escorted from Rod Laver Arena.

After winning the following point, Djokovic put an index finger to his lip, shushing the Melbourne crowd.

The protestor at the tennis yelled “free the refugees” #AusOpen

The brief stoppage seemingly did not halt the Sebrian’s momentum, the world No. 1 racing to a 7-5 6-2 lead.

Earlier in the tournament, a spectator was ejected from Rod Laver Arena after repeatedly taunting Spanish superstar Rafael Nadal during his second round match.