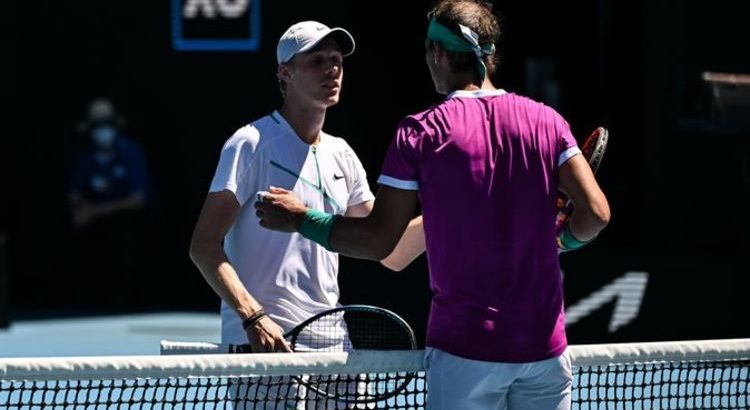 Djokovic ‘cleared out of the way’ for Nadal says Webster

Boris Becker has weighed in on the Rafael Nadal and Denis Shapovalov row after the young Canadian accused the Big Three of receiving preferential treatment from umpires. Shapovalov blasted the umpire for being “corrupt” when claiming the world No 5 deserved time violations during their five-set quarter-final on Tuesday.

Nadal struggled with a stomach issue as he called the trainer in the fourth set and took some tablets, attempting to keep himself cool with ice towels and the famous air conditioning tubes, eventually closing out a five-set victory to book a place in his seventh semi-final in Melbourne.

As well as his stomach problems, the Spaniard was forced to battle through multiple outbursts from his opponent, who wanted Nadal to receive time violations for taking too long between sets and points.

But the esteemed chair umpire hit back: “You’re not ready to play either because you came to speak to me,” as Shapovalov retreated to the baseline, shouting out: “You’re all corrupt.”

Moments later, the world No 14 pulled out of his return position when Nadal was serving to complain that he had run down the 25-second shot clock, but was told he was looking in the wrong place before coming to the net to exchange words with the 20-time Major champion.

“Why are you looking at me. They have eight seconds left to play. What do you want? Why do you look at me – we have the shot clock for this,” Bernardes said to Shapovalov.

And the 22-year-old didn’t mince his words in his post-match press conference, and when asked whether he thought Nadal received special treatment he said: “Of course. 100% he does. 100%.”

But Nadal shut down his claims saying he “made a lot of mistakes too when I was younger” as he responded: “I really believe that on the court you don’t deserve better treatment than the others. And I really don’t want it and I don’t feel I have it.”

Speaking on Eurosport, the former world No 1 claimed: “If the umpire strictly follows the rules, Shapovalov is right.”

While the retired German thought the likes of Nadal and his fellow 20-time Major champions Roger Federer and Novak Djokovic had earned special treatment, he agreed that the umpire needed to go with the rulebook.