Rafael Nadal admits reaching the semi-final of the ATP Tour Finals is tinged with sadness as no spectators can be present to watch the action. Nadal beat Stefanos Tsitsipas 6-4, 4-6, 6-2 in the final game of Group London 2020 on Thursday evening. The Spaniard will now play Daniil Medvedev in the last four on Saturday.

Nadal is looking to win the season-ending tournament for the first time in his illustrious career.

He admits luck has not been on his side in recent years but is now determined to end his barren run at the O2 Arena.

It is the final year London will host the tournament before it moves to Turin in 2021.

And Nadal is sad that London-based fans are not able to witness the tournament one last time. 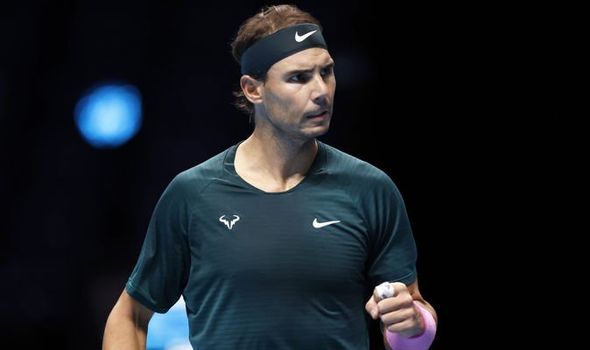 “Last year I was a little bit unlucky not to be in the semi-finals, the year before I had to pull out,” Nadal said.

“It’s always difficult to play here against the best players in the world every single day at the end of the season.

“Sad for the situation, normally after this good match the atmosphere should be fantastic as always. It’s a different story.

“Very sad to say goodbye to this amazing place under these conditions but that is what we are facing today around the world.

“I’m just excited to be in the semi-finals and I hope to be ready to try my best.”

Nadal didn’t lose a service game until late in the second set and Tsitsipas made him pay by drawing level at 1-1.

But after a string of breaks in the final set, Nadal eventually came out on top.

“I think I played quite well for such a long time,” he added.

“That game at 5-4 in the second affected it a little bit. I lost the second and then I was able to have the break in the third early but he broke me back.

“I think I was winning my serves quite comfortably until that moment, after that everything changed a little bit.

“I started to serve a little bit worse but in general terms it was a positive match for me.

“To be in the semi-finals at the last tournament of the year, it’s an important thing. I’m happy for that and I’m looking forward to that semi-final against Daniil.”