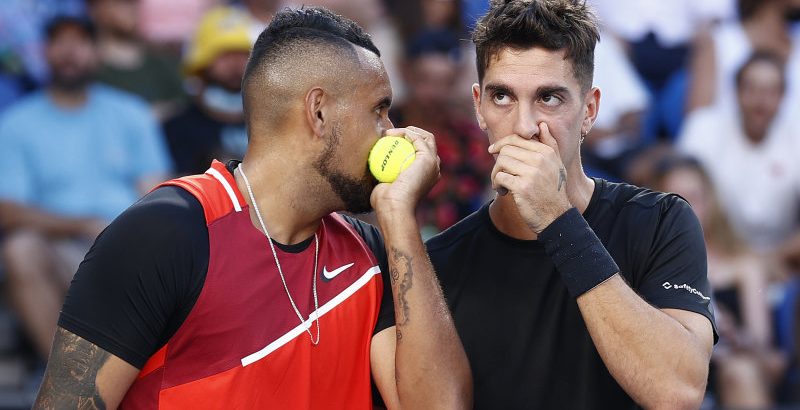 Nick Kyrgios and Thanasi Kokkinakis have rejuvenated the way the world views doubles – and they have the television ratings to prove it.

In the closing stages of the Australian pair’s thrilling three-set win against 15th seed Ariel Behar and Gonzalo Escobar at Kia Arena, television ratings figures provided to the Herald and The Age by Nine revealed there was an average of 280,000 viewers watching in Melbourne and 197,000 in Sydney.

According to Nine, those sorts of numbers are typically reserved for prime-time singles matches featuring the sport’s biggest names rather than a third-round doubles match.

Another industry figure said the pair are drawing similar ratings to the very best singles players left in the men’s and women’s draw, putting them on par with Ash Barty, Rafael Nadal, Alex de Minaur, Daniil Medvedev and Stefanos Tsitsipas.

The extraordinary ratings show the true value of the pair’s rejuvenation of doubles, though they are yet to displace any singles matches from Rod Laver Arena.

Kyrgios and Kokkinakis will play their doubles quarter-final in front of a “zoo” at Kia Arena after the pair were pencilled in to face sixth seed Tim Puetz and Michael Venus on Tuesday afternoon. 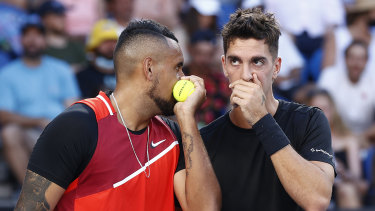 In prime time, Rod Laver Arena was reserved for Ash Barty’s clash with American Jessica Pegula and Matteo Berrettini’s clash with Gael Monfils, leaving Kyrgios and Kokkinakis to play in one of the public arenas.

The pair have both embraced and used Kia Arena to their advantage in consecutive wins against seeded opponents, and will have the chance to do so again on Tuesday.

Sources with knowledge of the situation said there are no guarantees the pair will link up again at any of the other slams, a point which is helping drive their run to a potential title at Melbourne Park.

“I think focus has been the biggest difference this year, as opposed to other years,” Kokkinakis said.

“Last year it was tough, it was about seven people in the stands with COVID and everything, but this year having that crowd support, you see how much it helps.

“It feels like a party atmosphere out there. And when we enjoy ourselves, first and foremost, I think that brings the best focus out of us.”

Kyrgios has clearly thrived in the team environment, a scenario he’s not played in since leading Australia to the ATP Cup semi-finals two years ago.

“I know that I’m definitely in a different mindset,” he said.

“I feel different. I feel as if in the past when I played doubles I haven’t done enough on court.

“Now, I’m making more returns than I used to, I’m trying to lead by example, in a way.”