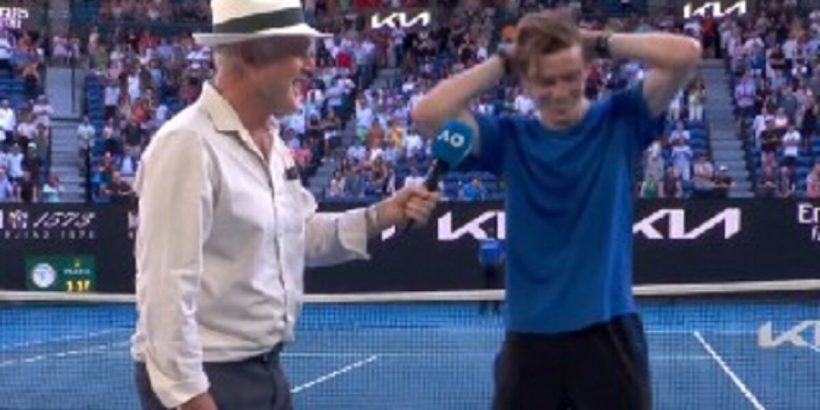 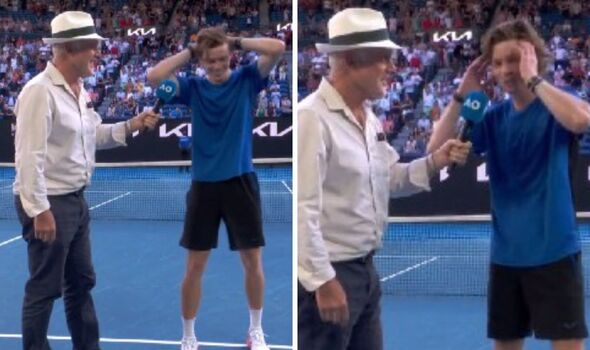 Andrey Rublev was left red-faced when he forgot about Alex de Minaur during his Australian Open on-court interview. The fifth seed booked his spot in the quarter-finals to face either de Minaur or Novak Djokovic and was quick to admit that he would rather face anyone but the nine-time champion in Melbourne before he was reminded that he had discounted the 22nd seed in front of the Aussie crowd.

Rublev reached the second Australian Open quarter-final of his career with a rollercoaster 6-3 3-6 6-3 4-6 7-6(9) win over Holger Rune on Monday. The 25-year-old now awaits the winner of a clash between Djokovic and de Minaur, but appeared to write off the home hope before the match had even started before being forced to apologise to the 22nd seed’s home crowd.

“No one wants to face Novak,” the fifth seed said of his next match. “I prefer to be in any other part of the draw but not Novak.” But John Fitzgerald – who was conducting the interview – quickly corrected him.

“Andrey don’t forget we have an Australian in this next round,” he laughed, as Rublev put his hands to his head in embarrassment and laughed off his blunder.

“I forgot! Sorry, sorry,” Rublev told the crowd. The 12-time title winner was part of a crazy match that saw him break Rune to love when the 19-year-old was serving for the match.

Rublev then saved two match points on his serve at 5-6 in the fifth to force a tiebreak where he went 0-5 down before setting up two match points of his own that he failed to convert. And he finally won on a dead let cord to the surprise of everyone in Rod Laver Arena. “It’s not a rollercoaster man, it was like they put a gun to my head. A rollercoaster is easier,” he said of the five-set thriller.

“In my life I was never able to win matches like this and this was the first time that I won something like this. Especially in a very special tournament like the Australian Open to be in a quarter-final so it’s something that I will remember for sure for my whole life and I don’t know man, I’m shaking a bit.”

But Rublev played down his chances against Djokovic in a potential meeting after forgetting to mention de Minaur, as he reached the seventh quarter-final of his career and was told by Fitzgerland that he would eventually get through to his first semi-final if he kept plugging away. “We’ll see, I don’t know man,” he responded.

“I’m just happy that I was able to win this match and I want to enjoy this evening so we’ll see what’s going to happen next.” Meanwhile, Rune told reporters that he would have relished the chance to face the fourth seed if he had been able to defeat Rublev.

Speaking after the three-hour-and-37-minute match, the world No 10 said: “I would have wanted to play Djokovic. Obviously we’ll have to see if he wins. De Minaur is super pumped. It’s his home tournament. I think it’s going to be a tricky match. But Novak, he comes up with incredible tennis when it matters. This is why he’s so good. So it’s going to be for sure interesting match. It wouldn’t surprise me if Novak is in the quarters, for sure.”