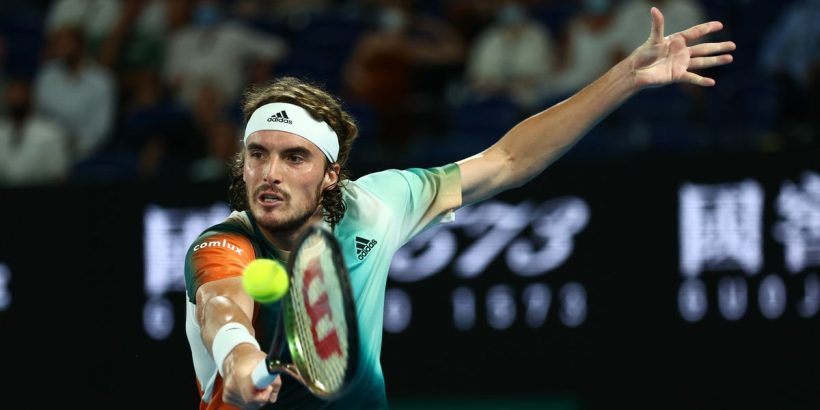 Stefanos Tsitsipas is at the centre of yet another on-court conduct controversy after he was slapped with more violations during his run to the Australian Open quarter-finals.

Apostolos, Tsitsipas’ father, is part of the Greek superstar’s coaching team and often appears to be giving out tactical tips to his son from the box during matches. On-court coaching is strictly banned on the ATP Tour.

During the Down Under Grand Slam, Greek tennis star Tsitsipas has been handed a coaching violation in his third-round win over Benoit Paire and his fourth-round triumph against Taylor Fritz.

At the end of the fourth set against Fritz, the umpire even told Tsitsipas to speak to his father and urge him to stop such behaviour or he would receive another violation.

Swedish tennis legend Mats Wilander believes Tsitsipas, who risked the wrath of Andy Murray at the US Open last year, must drop his father in order to continue his development.

“At some point his father needs to get out of there,” seven-time Grand Slam champion Wilander said on Eurosport . “Let Stefanos figure things out himself. You can have a proper go through the match beforehand and afterwards, but Stefanos can solve the problems [during the match].

“The situation [with the umpire] happens and then in the fifth set Tsitsipas wins it 6-4. He plays a brilliant set, maybe the best set in the whole match.”

Tsitsipas was down by a set heading into the fourth but fought back admirably to set up a quarter-final clash with 11th seed Jannik Sinner. Former British number one Tim Henman agreed with Wilander that Tsitsipas’ father needs stop advising his son during matches.

“It will make Stefanos a better player if he works it out for himself,” Henman added. “If he always has his dad in his ear saying ‘serve here, run there’ I don’t think he develops.

“To see the way that he played and behaved in the fifth set it was really impressive.”

It is an interesting debate that the Greek player has been embroiled in before. Last year, Tsitsipas insisted coaching on each and every point ‘should be allowed in tennis’.

Taking to Twitter, Tsitsipas wrote: “The sport needs to embrace it. We’re probably one of the only global sports that doesn’t use coaching during the play. Make it legal. It's about time the sport takes a big step forward.”

Fabio Fognini also complained about the 23-year-old receiving illegal coaching during their match at Indian Wells last year. The two exchanged harsh words with one another after the match, with the pair seemingly nearly coming to blows.

This controversy comes after Andy Murray condemned the timing and length of Tsitsipas’ toilet breaks during the three-time Grand Slam champion’s first-round defeat at the US Open last September.