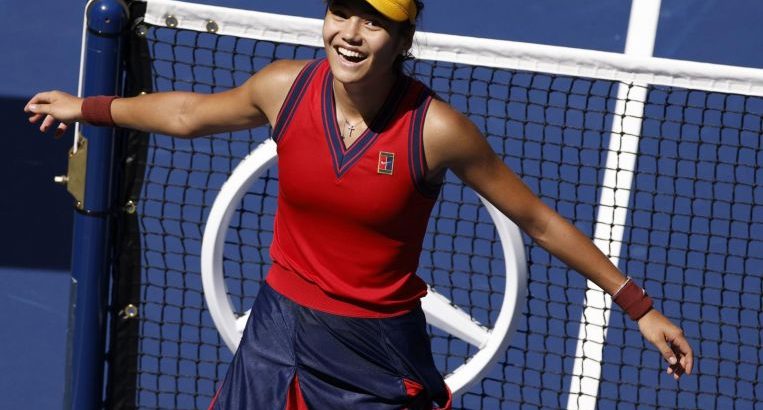 Raducanu, only the fourth qualifier to reach a Grand Slam semi-final, made the Swiss 11th seed the highest-rated victim of her young career in making history on the New York hardcourts.

“It was a really tough match,” Raducanu said. “I’m really glad to have come through.”

World number 150 Raducanu, who hasn’t dropped a set at the Open, had no clue she would become the new British number one or about the historic impact of her display on the New York hardcourts.

“I’ve actually got no idea about any of the records at all,” Raducanu said. “It’s the first time I heard I was the first qualifier to make the semis. I had no idea before that.

“I’m not here to chase any records right now. I’m just taking care of what I can do on the moment and on the match ahead.”

Next for Raducanu is a first-ever matchup against Greek 17th seed Maria Sakkari, who ousted Czech fourth seed Karolina Pliskova 6-4, 6-4.

Asked about the challenge of Raducanu, Sakkari said, “It’s great for our sport. We have many young girls playing really well right now. I trust myself. I trust my game.”

Raducanu became the youngest US Open women’s semi-finalist since Maria Sharapova in 2005, although she is only a couple of months younger than Canadian 19-year-old Leylah Fernandez, who will face second-seeded Aryna Sabalenka of Belarus in Thursday’s other semi-final.

A first-time Grand Slam champion at this US Open has already been assured. Only unranked Billie Jean King in 1979 and Kim Clijsters in her 2009 title run have reached a US Open semi-final with a lower ranking than Raducanu.

“I’m just really enjoying the experience,” Raducanu said. “Out there on the court, I was saying to myself, ‘This could be the last time you play on Ashe, so might as well just go for it and enjoy everything.'”

Bencic broke Raducanu to start the first set but an errant Bencic backhand allowed the British teen to break back for 3-3.

“It took me some adjusting at the beginning to get used to her ball speed, how aggressive she was,” Raducanu said. “Once I adjusted, I settled in. I didn’t overpress as much.

“I found a way to win, but it was very difficult to play against someone at such a high level.”

Raducanu smacked a forehand winner past Bencic to break again for a 5-3 edge, then held to take the first set in 36 minutes. In the second set, Raducanu broke to lead 3-2 when Bencic netted a forehand and the Briton held three times to claim the match after 82 minutes. Raducanu fired 23 winners against only 12 unforced errors.

“I found a way to win, but it was very difficult to play against someone at such a high level,” Raducanu said. “She was going to be tough to the end.”

Pliskova, this year’s Wimbledon runner-up, made an errant forehand in the third game on the only break point of the first set as Sakkari seized command.

Sakkari, who at one stage took 22 straight points on her own serve, broke to grab a 4-3 lead in the second set and held twice to claim the match after 82 minutes on a backhand down the line winner.

“I trusted my serve,” Sakkari said. “But now I’m going to trust it even more.”