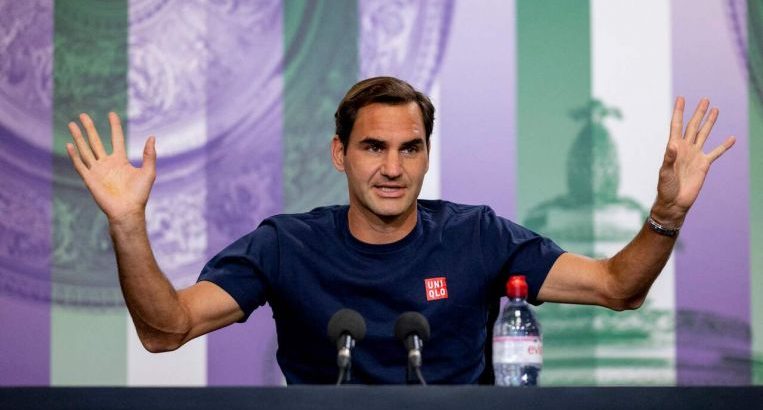 LONDON (Reuters) – Roger Federer may be closing in on his 40th birthday, but he said he still believes he can challenge for a ninth Wimbledon title if he gets on a roll when the grasscourt Slam starts on Monday (June 27).

The All England Club is as familiar to Federer as his own backyard, but he has played only a handful of tournaments in the past 18 months because of knee surgery.

His loss to Canadian youngster Felix Auger-Aliassime at Halle last week, a venue where he has won 10 titles, raised valid questions about his form.

Federer expressed his own disappointment with that match and his attitude on court, but he said on Saturday that there will be no repeat of that at Wimbledon.

“There’s ways to lose and a standard I set for myself how I go about things,” Federer told reporters in a pre-tournament media conference conducted via Zoom – one of the many changes as the tournament returns following last year’s cancellation because of the coronavirus pandemic.

“The good thing now looking back is I know it will not happen here because I’m ready, I’m excited, I’m pumped up. I know I can do so much better.”

“I don’t know what it was, to be honest,” Federer added of his Halle setback. “But I think I’ve got to take the positives out of these last few weeks, that I’m actually here at Wimbledon right now and I have a chance.

“I know if I get rolling, I get into the second week, which is the goal here right now, that I get stronger and stronger as every match goes by, I believe it’s very much possible.”

Despite being the king of Wimbledon, Federer has found himself in the same strict bubble as every other player in the draw this year, rather than in his usual plush rented house with his family a stroll away from the grounds.

Like all the players he will be staying in the Park Plaza hotel in central London and will have to abide by the strict Covid-19 protocols which limit their entourage to three people, including coaches and physios.

“It’s the bubble. It doesn’t matter what the (hotel) room size is, whatever, it’s just living the bubble life is different,” the 20-time Grand Slam champion said.

“Took me some getting used to the first day or two, understanding where we’re allowed to go, what we’re allowed to do. Same thing with the on-site protocols. How does it work? By now I’ve gotten used to it. I’m embracing it. I’m OK with it.

“It does feel totally different than the last 20 years here since I’ve been coming here. We would arrive with the family, kids would be running everywhere. We organised the grocery shopping, get the house set up and all that stuff.

“But look, I still feel a big privilege that I’m actually able to play Wimbledon. I’m not going to be complaining. Wimbledon tries to put on the best bubble possible.”

Federer’s last match at Wimbledon was a heart-breaking defeat by Novak Djokovic in an epic final in 2019.

The sixth seed will open his record-extending 22nd Wimbledon campaign against Frenchman Adrian Mannarino on Tuesday.