Red-hot Belarusian ball-masher Aryna Sabalenka is the player to beat for this year’s Australian Open women’s singles title, according to 2008 semi-finalist Daniela Hantuchova.

Sabalenka, who started the year with victory at the Adelaide International, had never gone beyond the fourth round at Melbourne Park in five previous trips but will face resurgent Croatian Donna Vekic in a quarter-final on Wednesday. 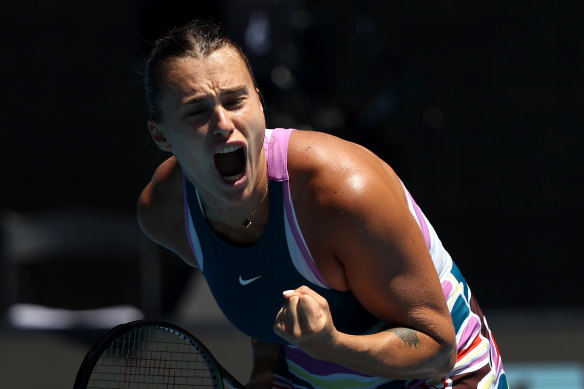 Aryna Sabalenka downed Belinda Bencic to earn a place in the quarter-finals.Credit:Getty Images

The 24-year-old, ranked fifth in the world, has long been considered a future grand slam champion and has reached three semi-finals in her past five major appearances.

An extreme case of serving yips destroyed Sabalenka’s Australian Open title tilt last year, but those problems are a distant memory, as evidenced by her not dropping a set all year.

“It’s crazy open [for the women’s title], but I would say the favourite is Sabalenka – just the way she’s played, especially against [Elise] Mertens,” Hantuchova said.

“The conditions are quick, and the balls fly quite a bit, so if she serves well, I think she’s a slight favourite above everyone else. 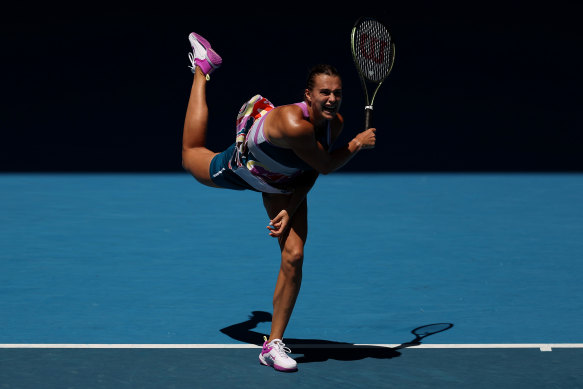 Aryna Sabalenka has the weapons to go all the way.Credit:Getty Images

“When Sabalenka plays, it’s always on her racquet. To me, Sabalenka is kind of like [dual Wimbledon champion] Petra Kvitova – if she’s on, you’re kind of just picking up the balls, so she can challenge anyone.”

Former world No.2 Agnieszka Radwanska, who made the semi-finals at the Melbourne grand slam in 2014 and 2016, also believes Sabalenka will be “dangerous” for the rest of her rivals.

Part of the reason for that is her improved composure on court, something Sabalenka herself has discussed this summer.

“She’s calmer, and you can really see that she’s not panicking,” Radwanska said. “Sometimes, you could see she was getting frustrated and a couple of points [balls] were going to the stands, but now she’s controlling her emotions, staying really calm and playing shot-by-shot and point-by-point.

“That is helping her, especially with her temper. With the power she has, she is, for sure, dangerous.” 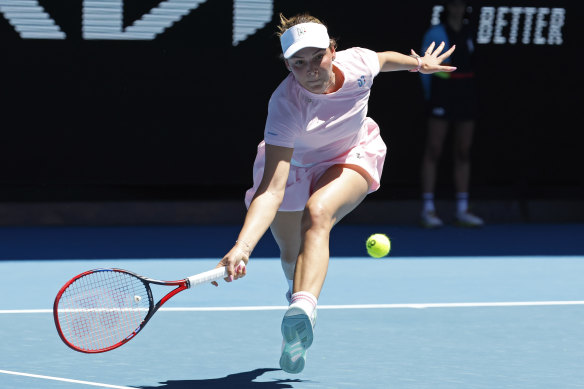 Hantuchova and Radwanska are also aligned on their opinion that world No.1 Iga Swiatek, who exited the Australian Open in straight sets to Wimbledon champion Elena Rybakina, will find it “challenging” to match her dominant 2022 campaign.

Swiatek claimed the WTA Tour’s top ranking when Australia’s Ash Barty retired, and went on to post a 67-9 win-loss record, including a 37-match winning streak between February and July, and win the French and US Open titles.

“I don’t think she can back that up,” Hantuchova said. “Players study and coaches talk, so they are going to try to figure out how to play against her, so, of course, it’s always much harder to do it the second year. If she can win half of that; I think she’ll be happy.”

Hantuchova said the slicker Melbourne Park surface did not suit Swiatek as much as what the slower, higher-bouncing hardcourts in Indian Wells and Miami would, while Radwanska expected her to thrive during the claycourt swing.

“It’s going to be a challenging year for her, defending pretty much everything after an incredible season last year, and it’s not easy when you’re No.1 and everybody wants to beat you,” Radwanska said.

“But, I think even losing here in the fourth round, she still can play a great season and especially on the claycourts, on her surface, and, of course, tennis is a sport that has ups and downs.

“Nobody is a machine, and sometimes you just don’t have your day and cannot play to your 100 per cent … I think it’s another experience for Iga, with that pressure, and we’ll see how it’s going to go.”