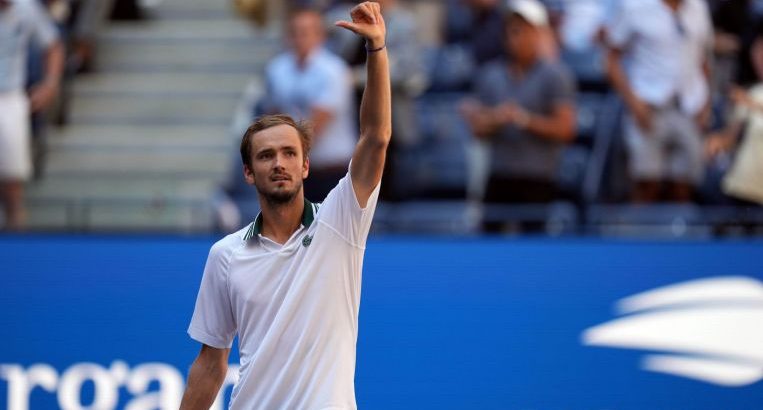 “Semis again,” Medvedev said. “I just want to do a little bit better than the last two times and get this extra step, which is the toughest one, actually.”

The 25-year-old from Moscow was a runner-up at the 2019 US Open and at this year’s Australian Open, where he lost to top-ranked Djokovic, who is trying to complete the first men’s singles Grand Slam since Rod Laver in 1969 by winning his fourth US Open.

Medvedev is assured of playing a first-time Slam semi-finalist for a berth in the final, next facing the winner between 55th-ranked Spanish 18-year-old Carlos Alcaraz and 21-year-old Canadian 12th seed Felix Auger-Aliassime.

“Playing against Felix or Carlos I think is already great for tennis,” Medvedev said. “It’s amazing.”

Alcaraz, who ousted third-ranked Stefanos Tsitsipas of Greece in the third round, could become the youngest US Open men’s semi-finalist since 1960 and the youngest in any Slam since 17-year-old Michael Chang won the 1989 French Open.

He’d also be the first man to reach the US Open semi-finals in his debut since Eric Sturgess in 1948.

Medvedev won his only meeting with Auger-Aliassime in Canada in 2018 and his only match against Alcaraz in the second round this year at Wimbledon.

Van de Zandschulp hoped to become the first qualifier to reach the US Open semi-finals and only the sixth to do so at any Grand Slam event.

But he sent a forehand long to hand Medvedev his third service break and close the first set. Then the Russian blanked the Dutchman in the second set.

Van de Zandschulp broke to 4-2 in the third set on a forehand winner and held twice more to capture the set, Medvedev sending a backhand long to drop his first set of the tournament.

“First two sets he was missing. I was controling the game,” Medvedev said. “Third set he started missing less.”

Medvedev took the only break of the final set on match point when the Dutchman netted a forehand drop volley to end matters after two hours and 23 minutes.

“It’s an amazing run to make it from qualies to quarters,” Medvedev said of his rival. “He played so many tough matches and was still able to come back and play top level in the third and fourth sets.”

Left-hander Fernandez, who turned 19 on Monday, ousted defending champion Naomi Osaka of Japan and three-time Grand Slam champion Angelique Kerber of Germany – rallying from a set down each time – to reach her first Slam quarter-final.

Svitolina, who turns 27 on Sunday, enters on a nine-match win streak as she seeks her third Slam semi-final and chases her first major crown.

The winner books a semi-final matchup with either second seed Aryna Sabalenka of Belarus or Czech eighth seed Barbora Krejcikova, each seeking a WTA-best 43rd match win of the year.

Sabalenka hopes to match her deepest Slam run from July at Wimbledon by reaching the semi-finals while reigning French Open champion Krejcikova is in only her second Slam quarter-final.