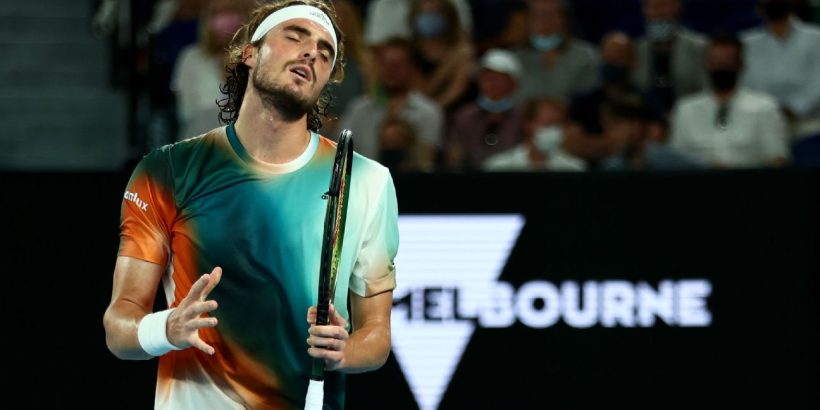 Stefanos Tsitsipas booked his place in the quarterfinals of the Australian Open after a roller-coaster win over American Taylor Fritz. The world’s No. 4 player eventually won 4-6, 6-4, 4-6, 6-4, 6-3 in a match in which he was hit with serve and coaching violations, and he had a won a set and didn’t even realize it at the time.

Oh, and he also tweeted midmatch (at least a tweet was published off his official account during the first set).

At around the point when it was 2-2 in the first set, a tweet appeared on Tsitsipas’ account. It was most likely a scheduled tweet, but it proved to be a premonition as Tsitsipas’ Monday soon got worse. He was hit with serve shot-clock violations — the first on deuce, which resulted in Tsitsipas losing his first serve. He managed to hold serve there, and after the game, he asked the umpire where the shot clock was on Rod Laver Arena. Despite being better informed, he was again admonished for slow play in his next service game and needed a warning from the crowd to prevent another violation. Fritz ended up breaking him in that service game to take the first set.

Tsitsipas then took the second set 6-4, but having secured it, he was preparing to serve at the back of the court, only to be told he had time to rest. This was nothing new. After not realizing he’d won his third-round match against Benoit Paire, he had to be told by his team in the stands he was through. He was asked after the match what was going on against Fritz at that point in the match, and he answered: “I have no idea — it’s not the first time. It’s a good thing to have I think — when you’re so concentrated and into the match that you forget the score — it’s kinda like meditation.”

He then expanded on this answer to Eurosport, saying his mindset saw him “focus on building geometric patterns and structure of the game. [I try to] see into the future — what’s the next move. [It’s] kinda like playing chess — I want to play chess. It’s a very nice, beautiful thing to be able to zone in so much — have all this noise around you, but remain in the present moment. It kinda feels like time slows down.”

Tsitsipas lost the third set, but broke back in the fourth despite having his rhythm disrupted by being hit with a coaching violation. Down 0-15 in the sixth game of the fourth set, his father and coach Apostolos was getting more animated in the stands, which prompted a coaching violation from umpire Damien Dumusois. Stefanos Tsitsipas was seen motioning to his father to calm him down, while Dumusois also appeared to plead with Apostolos for him to stop with his overbearing advice.

“It’s a great match, but if he keeps talking to you, I have to keep giving you a code [violation],” Dumusois said to Stefanos Tsitsipas.

By the fifth set, Tsitsipas broke Fritz at 4-4 and served out to book his spot in the quarterfinals against Italy’s Jannik Sinner.

As he reflected on the “epic match” afterward, he said he was heading off for an ice bath. The match finished just after midnight in Australia, so after what Tsitsipas described in his first-set tweet as his “Mondayest Monday,” he enjoyed a terrific start to Tuesday.