Ash Barty will be the first Australian woman to contest a Wimbledon final in 41 years after she claimed a straight sets, semi-final win against Angelique Kerber.

Barty played what she described in her on-court, post-match interview as the match of her life in the 6-3, 7-6 (3) win. 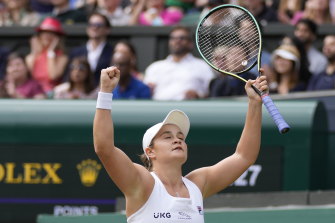 Ash Barty is into a Wimbledon final.Credit:AP

The 2018 Wimbledon champion painted the lines on both sides of the court and broke Barty’s first service game of the second set but the Australian’s defence was resolute.

The backhand slice every opponent envies was Barty’s go-to defence mechanism as Kerber hit what should have been winner after winner.

But the German’s level eventually dropped, Barty broke serve as Kerber served for the set, forced a tiebreak and never looked back. 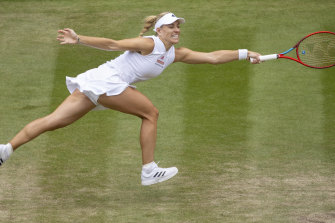 Kerber fought back in the second set but couldn’t stop Barty.Credit:Getty

She shot out to a 6-0 lead in the tiebreak and booked her ticket to Saturday night’s (AEST) final soon after.

It was the performance of a future Wimbledon champion, even if Barty fails to earn that title on Saturday night.

Barty is now on the cusp of achieving a childhood dream and emulating one of her idols – Evonne Goolagong Cawley.

Goolagong Cawley is the last Australian woman to both contest and win a Wimbledon final, in 1980.

Barty and Goolagong Cawley are close and the former has worn a dress as a nod to the latter’s run to the 1971 Wimbledon title over the last fortnight.

Catch Ash Barty and tennis’ biggest stars in action at Wimbledon with every match of the tournament streaming live and ad-free on Stan Sport with select games on 9Gem.