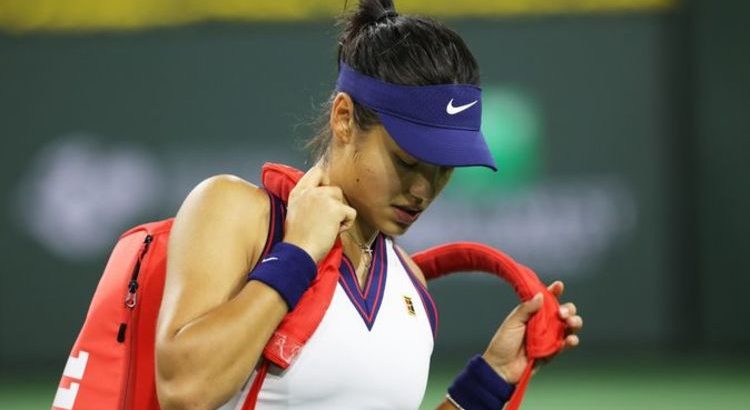 There was plenty of anticipation on what the 18-year-old could achieve at the BNP Paribas Open with one eye on the season-ending WTA Finals.

A strong run at Indian Wells would have given her a huge boost in the rankings but Raducanu lost in straight sets to Sasnovich.

Raducanu was visibly frustrated in the second set as her 27-year-old opponent made the most of the conditions on the slow court.

Speaking after the match, Raducanu praised Sasnovich and even admitted to being “glad” that she lost the match.

Still very inexperienced at the highest level, Raducanu knows there is still plenty of work to be done on her game.

And there clearly isn’t any need to rush on any decisions for her immediate future, although parting ways with Andrew Richardson, who helped lead Raducanu to glory at the US Open, raised a few eyebrows ahead of Indian Wells.

Navratilova isn’t sure splitting with Richardson was a “good idea” and the 18-time Grand Slam champion also doubts whether Raducanu yet understands how to cope with her sudden rise to fame.

When asked what she thought Raducanu would take away from her loss, Navratilova told Tennis Channel: “This match, maybe not that much.

“This is her fifth tournament, we have no idea how she plays on different surfaces but life has changed so much for her.

“We can go into the x’s and o’s. She was five-of-21 on second serve points won. That’s now what lost her the match.

“I think her life changed so much, she just really doesn’t quite know how to handle it.

“Nobody’s been in this position before. She’s blazing her own trail.

“It’s more about how she manages her stuff off the court. Coaching change as well which I don’t know if that was a good idea.

“There’s just so much going on for her, she just needs matches. She needs to play.”

Raducanu is now scheduled to compete next at the Kremlin Cup later this month before competing in the Transylvania Open.

Her final tournament of the season is currently set to be in Linz, but that could change to the WTA Finals if she climbs high enough in the rankings.