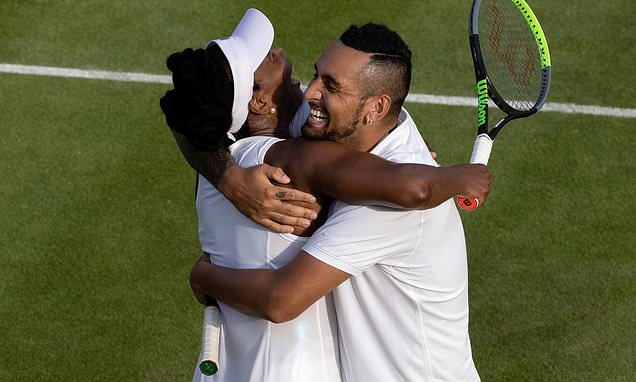 Venus Williams and Nick Kyrgios are the perfect match as doubles dream team deliver box office performance in first-round win at Wimbledon with laughter, swearing and good tennis all in equal measure

What started with a tweet has resulted in a new doubles dream team. When Nick Kyrgios posted ‘mixed dubs Wimby?’ on social media last week, he could not have expected it would be Venus Williams who came calling.

But that was how Wimbledon’s odd couple first came to be formed — and the champion and the chunterer proved to be box office on their first outing.

The Court 2 crowd more than got their money’s worth as Kyrgios and Williams fought to a 6-3, 3-6, 7-5 first-round win over Americans Austin Krajicek and Sabrina Santamaria. There was laughter and swearing in equal measure but also good tennis. 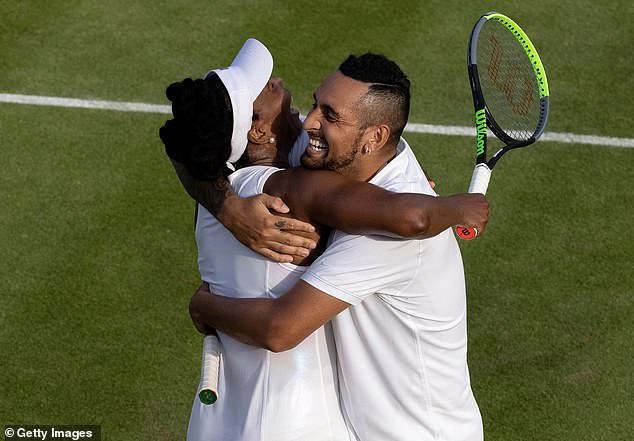 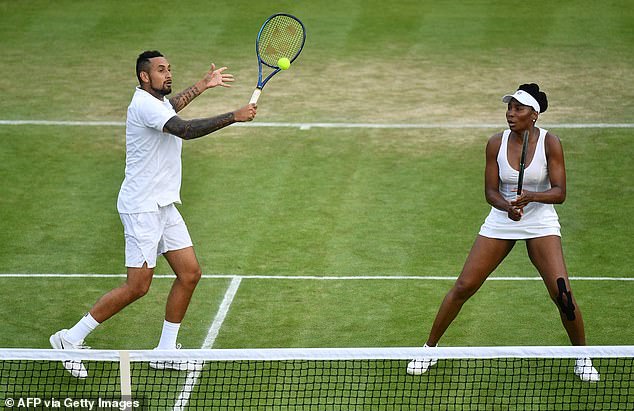 Kyrgios had said this week it was a ‘dream come true’ to play with 16-time Grand Slam doubles winner Williams.

For her part, Williams had said as long ago as 2017 that the bad boy Aussie was the player she would love to partner.

The way they clicked from the off seemed to surprise even themselves, with Kyrgios saying to Williams early on: ‘Pretty good set for the first time we’ve played together.’

They suffered a setback in the second and Kyrgios was rattled in the third, swearing at the umpire after a couple of close calls.

But after Williams saved two break points at 5-5 in the decider, they broke Santamaria to set up a second-round clash with fourth seeds Edouard Roger-Vasselin and Nicole Melichar. 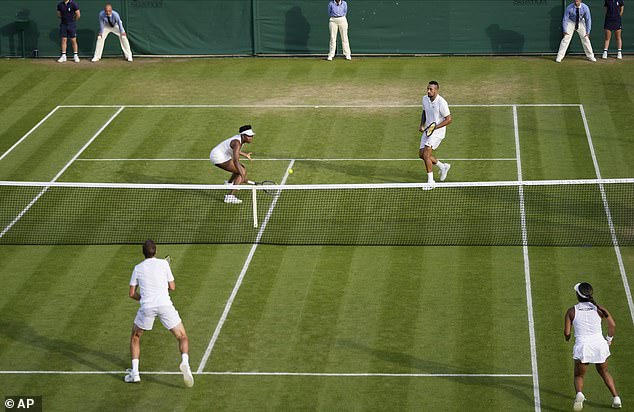 They fought back to a 6-3, 3-6, 7-5 first-round win over Austin Krajicek and Sabrina Santamaria

If Kyrgios, who plays Felix Auger-Aliassime in the third round of the singles on Saturday, has had a ball at Wimbledon, the same cannot be said for Stefano Tsitsipas.

The French Open finalist could have been back at his home in Monte Carlo soaking up the sun. Instead he hung around in a hotel in London to play doubles with his little brother — and only succeeded in making his miserable week worse.

The Greek had entered the men’s doubles draw before he crashed out of the singles in straight sets to Frances Tiafoe on the first day, perhaps with the idea of getting more game time on the grass.

And Tsitsipas must have wished he had not bothered as he and his 20-year-old brother Petros were beaten 7-5, 7-6 by Britain’s Cameron Norrie and Jaume Munar of Spain. 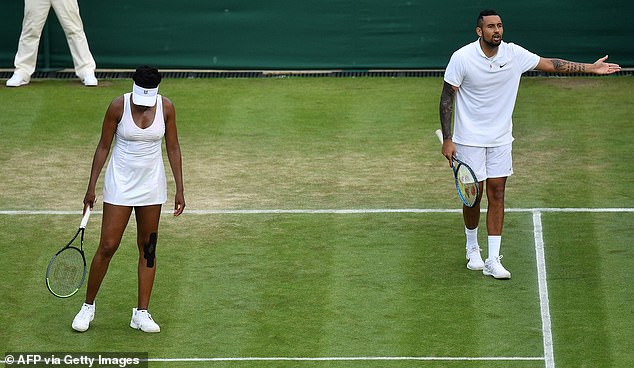 The entertaining duo suffered a setback in the second and Kyrgios was then rattled in the third, swearing at the umpire after some close calls