Former world No.1 Victoria Azarenka has questioned why the French Open is allowing spectators to attend the two-week tournament despite rising COVID-19 infection rates in France.

Speaking ahead of the tournament the 31-year-old Belarusian said she was surprised the claycourt Grand Slam was allowing 1000 fans each day and not following the lead of the recent US Open that excluded spectators throughout. 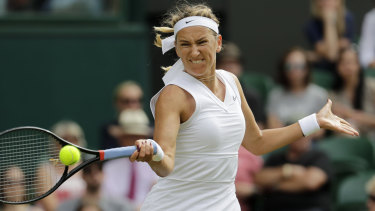 "Having fans and playing in front of fans is what we prefer as players, but with these circumstances I'm a bit more nervous about that. I don't know why we are trying something new.

"We had one Grand Slam where things worked out well, but I guess we always need to try something new for no reason."

No fans were permitted at Flushing Meadows where Azarenka rolled back the years to reach the final, losing out to Japan's Naomi Osaka. The French Open, postponed from its normal May/June slot to this month, because of the novel coronavirus pandemic, initially planned for 11,000 fans per day.

That was then dropped to 5000 and on Thursday it was capped further to 1000 by the French government.

Spectators or not, Azarenka, who has returned from serious injuries, childbirth and personal issues since she reached her only French Open semi-final in 2013, said she was relishing the challenge of what was once her least-favoured Slam.

"I used to hate clay. I hated everything about it. The bounces, the sliding that I can't stop. Ask me what I could not complain about when I used to play.

"But I feel like, especially from last year, I felt that I finally started to find my rhythm, enjoyed myself playing on clay, sliding, instead of cussing the clay every single time.

"I'm actually looking forward to it. I'm actually excited about building up my claycourt game. Sixteen years on tour, it's about time to make some evolution on it."

Azarenka reached the semi-finals in Rome last week, losing to Simona Halep, and will be seeded 10th at Roland Garros, the first time in four years she has been seeded at a Grand Slam.