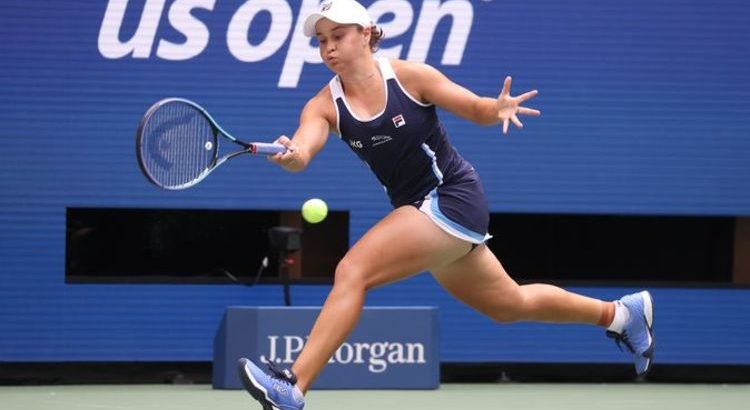 Andy Murray and Ash Barty pay tribute to each other

Ash Barty opened her campaign for a second successive Grand Slam title with a win over former top ten player Vera Zvonareva. The world No 1 clinched a 6-1 7-6(7) victory over the 2010 runner-up but struggled to close out the match after a bizarre incident that saw the players forced to stop for an electronic malfunction.

Barty faced a tough opening round opponent in former world No 9 Zvonareva in her first US Open match since 2019.

The top seed skipped last year’s tournament, and most of the tour in 2020 over uncertanties during the pandemic, but has dominated since returning this year.

She comes into Flushing Meadows off the back of a 13th career singles title at the WTA 1000 in Cincinnati, as well as her second Grand Slam victory at Wimbledon.

The Aussie raced to a 6-1 lead over the two-time Grand Slam finalist but her momentum was stopped in the second set after a technical error halted play, with Barty sounding displeased.

While a set and a break up, Barty was forced to abandon her service game when the electronic line calling system malfunctioned.

Both players were made to return to their benches, as the world No 1 asked the chair umpire whether they could continue playing with human line judges, shaking her head when she was denied.

The pair were forced to wait for the system to come back online indefinitely but luckily were back on court within minutes, though Barty failed to serve out the match.

The two-time Grand Slam champion gifted her opponent a break when serving for the win at 6-1 5-4 as she hit a double fault to drop serve.

Zvonareva was able to capitalise and get herself into a second set tie-break over the top seed, but failed to convert a set point as Barty hit a forehand winner to keep her chances of a straight-set victory alive.

The Aussie managed to close out the match with a 9-7 win in the breaker, and was visibly beaming to be back winning on hard courts of New York, despite her lapse in the second set.

“It obviously got really tense in that second set – tight – and in the bigger moments I was able to be aggressive and trust myself and that was a massive thing today,” she said.

“There were a couple of games where I had lapses in concentration but I was able to come through in straight sets and now we go back to the drawing board, work on a few things and we’ll be as happy as Larry.”

After firing 11 aces and 31 winners to seal victory, the 25-year-old also said she was happy to see fans back at the US Open this year.

Last year, the tournament was played behind closed doors and, although Barty opted to stay home in Australia during the crowd-less edition, she was happy to be back in the city with more normality than players experienced in 2020.

Speaking in her on-court interview, she said: “I was disappointed not to be able to come and play last year but playing this time with the fans has made it all the better.

“It is so much fun being back in New York and with the city is buzzing again as it should be so it’s really nice to be able to share this with everyone out here today.

“We made the right decisions for us. It was a unique year for everyone last year but we trained and got ready, we had a really long pre-season and came into this year with the attitude it would be a different adventure for us. It has been something different but a really enjoyable ride from the start.”