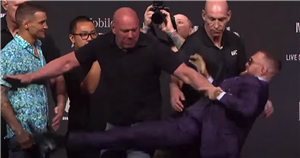 Conor McGregor went face-to-face with Dustin Poirier for the first time since his TKO defeat at the hands of his Lightweight rival during their previous meeting in January.

Despite that being his first loss of his career in that manner, the Irishman was in confident mood ahead of their trilogy bout when they met in Las Vegas for the initial press conference.

The 32-year-old has been defiant when asked about his motivation for the fight in recent weeks, dismissing claims that his wealth and previous success dwarf the rewards on the table now.

Meeting in front of a huge crowd at the T-Mobile area on Thursday, Dana White promoted what is considered one of the biggest trilogies in the history of UFC.

McGregor promised his opponent: "You're getting walked like a dog in that octagon.

"This is my bread and butter, this is what wakes me up in the morning with fire in my belly. Errors to correct, tactics to prepare for, I've had a great camp and a great focus on the opponent.

"I'm going to go through his head, put holes in it and take it off his shoulders. He's done here, this is it for him, it's the end of the road. Saturday night he's getting walked around that octagon like a dog and put to sleep.

"This will be beautiful, it will be another feather in the cap, it's what I love to do. I love to come in here, defy the odds, do the unthinkable and put on a show."

Will Conor McGregor beat Dustin Poirier to complete their trilogy? Give us your thoughts in the comments

Poirier replied: "For me the aura is not there anymore, a very dangerous fighter sitting here no doubt but I see a man.

"You guys in the crowd cheer it up and have fun but I see a man I've defeated and whom I'll defeat again.

YouTuber turned professional boxer Jake Paul was quick to have his say on proceedings, having been linked with a fight against McGregor in the past.

"He no longer speaks from a place of authenticity and you can tell he’s trying to convince himself of his own lies.

"He takes offence to everything now; he’s bathing in his own insecurity’s [and] when we fight I will further expose him for the fraud he is."