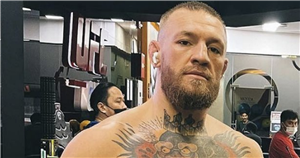 Conor McGregor looks fit and ready to get his UFC career back on track by beating Dustin Poirier in July after losing by technical knock-out in their rematch earlier this year.

The 32-year-old returned to the octagon for the first time in over a year back in January after beating Donald Cerrone in 2020, but lost in the second round following a barrage of punches.

That loss saw the Irishman slip down the lightweight rankings, but a rematch was swiftly organised by Dana White to complete a memorable trilogy between the rivals.

McGregor has kept his 39million Instagram followers regularly updated as he trains for his July 10 return, and his improved physique would’ve caught the eye of many.

During the first three days of May, McGregor has posted five separate updates, three of which are new pictures of his toned body after putting in the hard hours in the gym.

The first of which included the caption: “Jacked and loaded, what’s next?”

Another post showed his brutal win over Cerrone from last year, which was his first UFC appearance since losing to Khabib Nurmagomedov by submission back in 2018.

He said: “Watch me open up the arts and puck these peasants around. Starting July 10th.”

McGregor said after his latest defeat: “It’s what I get for picking this bout and opponent as a precursor to a boxing match against Pacman (Manny Pacquiao).

“I deserved to get the legs kicked off me going in with this thinking. This is not the game to play around.”

White said of the upcoming bout last month: “I am so happy to finally be able to say Vegas is back.

“This summer, Las Vegas is back open for business and on July 10, UFC 264 will be at the T-Mobile Arena at 100 per cent capacity.

“Ladies and gentleman, that is 20,000 fans and this card will be headlined by the third fight between Dustin Poirier and Conor McGregor.”