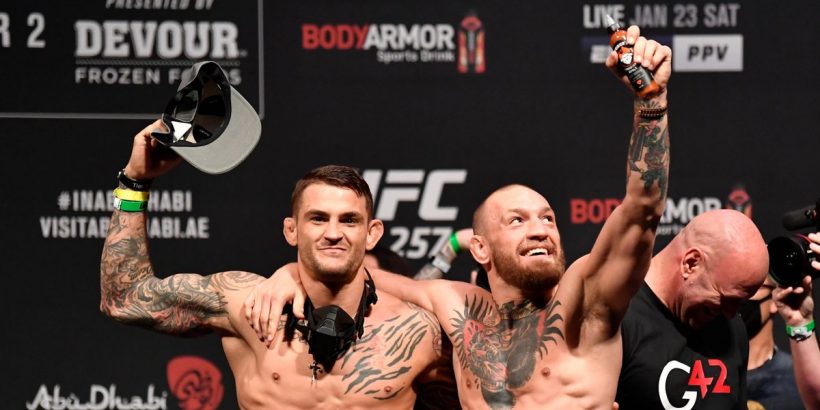 Dustin Poirier admits Conor McGregor donated to his Good Fight Foundation, as promised in the run up to their rematch at UFC 257.

The former runs the charity which allows 'Athletes and fans to join together, fight for underserved communities and answer the call of those in need.'

Poirier and McGregor have engaged in significantly less trash talking this time round, six years after first meeting in the Octagon.

And Poirier admits his Irishman counterpart reached out with a significant donation in the run up to their clash at Fight Island this weekend.

“I don’t want to make it seem like we’re up here giving each other back massages but Conor, I just want to clear the air," Poirier said.

"Conor’s team, McGregor Sport & Entertainment, did reach out to my foundation and they are starting the process toward that donation.

“So Conor, man-to-man, you’re going to help a lot of people with that.”

But McGregor has been incredibly charitable in other ways over the past year.

SBG Portarlington boxing gym in County Laois were planning to close their doors for good due to financial complications brought on by Covid-19 lockdowns throughout the country.

But owner Philip Mulpeter, a longtime friend and former training partner of McGregor’s, soon received a call from the two-weight UFC champion, who offered to provide a cash injection to keep it from closing.

“I was like nearly crying [when McGregor called]," Mulpeter told ESPN.

“I didn't know what to say to him, to be honest. I'm forever grateful to him.

“He basically saved our little community. Words can't express what he's done for us. I know that he gets bad press.

"People don't report on it, but he does this stuff all the time.