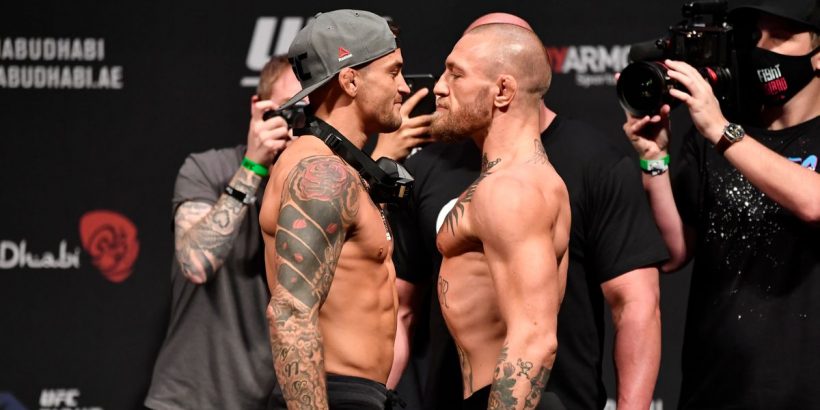 Dustin Poirier’s boxing coach, Dyah Davis, has predicted that the American will win his upcoming rubber match against Conor McGregor via third-round knockout

Poirier defeated long-time rival McGregor at UFC 257 in January earlier this year, knocking the Irishman out in the second round. His victory levelled the score between the two men at one apiece, following McGregor’s 2014 victory over the Diamond.

In a recent interview with MMA Junkie, Davis, a former opponent of James DeGale, said he believed Poirier’s activity will give him the edge in the upcoming bout.

“Dustin is active, I think that definitely plays to his favour.

“Conor was out of the game two, three years so ring rust can possibly play a factor in it, but listen, you’re a fighter. “Conor is a fighter first and his job as a fighter is to be in the gym on a constant basis. You should be training, you should be sharpening your tools and that’s what Dustin does.

“Even if he doesn’t have a fight scheduled, he’s still in the gym, he’s still training, he’s still doing what he’s supposed to do. He’s still being responsible as a fighter.”

Davis was also asked about what strategy Poirier would employ to defeat McGregor in their upcoming bout. It seems for the Diamond, leg kicks will be an essential tool just like they were in the rematch.

Do you think Dustin Poirier will defeat Conor McGregor in their upcoming fight? Let us know in the comments section below.

“I take this approach as if a lumberjack, we’re in a forest.

“The idea is to chop the tree down from the bottom and that’s exactly what we did. It’s a fight. So we look for any weaknesses that we could take advantage of and that was one of them.

“So we capitalized and we moved on from there and ended up finishing him with strikes.”

“I think it’ll play out similar to the second fight, maybe a little bit longer. I see us executing and getting a KO victory in the third round.”

UFC 264 takes place on July 10 at the T-Mobile Arena in Nevada and is shaping up to be a brilliant night of fights.

Alongside McGregor vs. Poirier III, a welterweight clash between Gilbert Burns and Stephen “Wonderboy” Thompson is slated to feature in the co-main event slot.