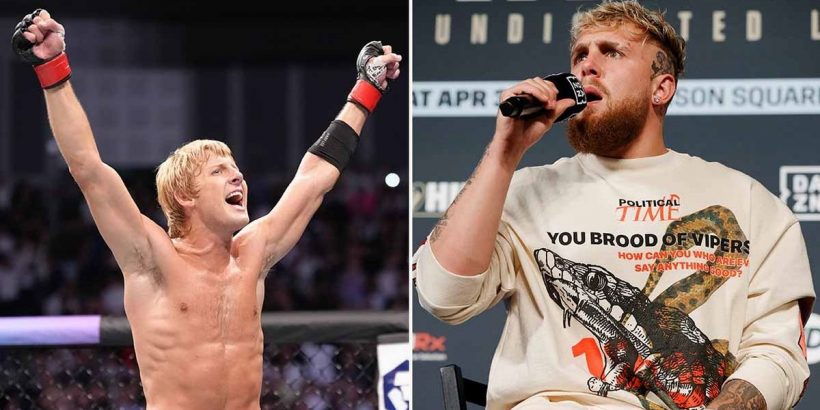 Jake Paul has ordered the UFC to pay Paddy Pimblett the 'millions' he deserves after the Scouse star's latest big win in the Octagon.

On Saturday night, 'Paddy the Baddy' enhanced his growing reputation at UFC Fight Night in London by submitting Jordan Leavitt in the second round of their lightweight contest. After the win, he paid tribute to young fan Baby Lee, who passed away last month with cancer, and a close friend who he learnt on Friday had committed suicide.

Pimblett, 27, had been at his charismatic best in the build-up to the fight, flashing his backside to reporters in a riposte to critics of his eating habits. He also goaded Leavitt at the weigh-in by pretending to shake his hand before moving out the way and geeing up the crowd.

On Friday, he even had his Twitter account suspended by authorities, not the first time he has fallen foul of social media bosses. The reasoning behind the ban is yet to be made clear.

Earlier this year, Pimblett was handed a new four-year contract by the UFC, following controversy over his pay for his previous two fights. He reportedly earned just £18,000 for his victory over Rodrigo Vargas.

And Paul, who has long taken aim at Dana White for what he argues is inadequate pay for UFC stars, responded to the Liverpool FC fan's latest win by taking to Twitter to post: "Pay Paddy his millions now."

Can Paddy Pimblett go on to become a UFC champion? Let us know in the comments section.

'The Problem Child', who boasts a 5-0 record in pro boxing, is currently preparing for his own big clash against Hasim Rahman Jr on August 6 in Madison Square Garden. And his latest tweet comes off the back of him labelling UFC 'dead for a year' last month, also proposing a boxing match between him and legendary UFC fighter Nate Diaz.

"I get why fighters are trying to leave, boxing is s****ing on MMA this year," he told ESPN. You haven't heard of any UFC fights and they've all be boring so I get why Nate is trying to get out, he's trying to come and face the money man which is me. It makes sense and I guess Dana White agrees."

Paul further mocked White by even offering to fight Diaz for free, as long as the UFC supremo increased his fighters' minimum pay to $50,000 per bout.