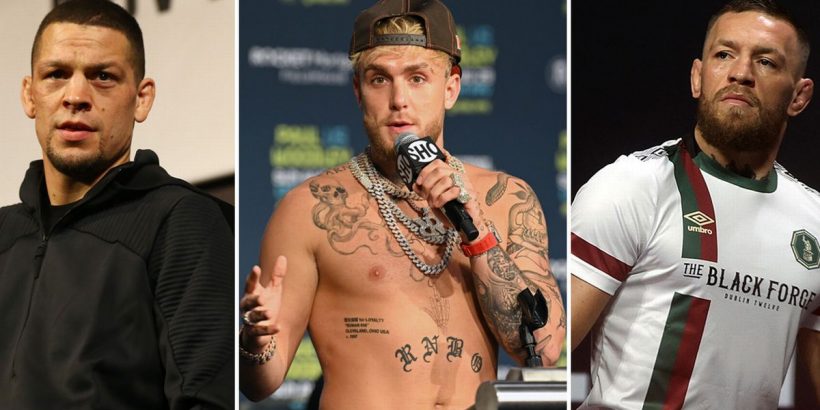 Nate Diaz will prioritise a boxing match with Jake Paul over a trilogy bout with Conor McGregor, according to a former UFC rival.

Diaz, 36, beat McGregor back in March 2016, only for 'The Notorious' to exact revenge five months later. In the five years since, Diaz has only fought in three UFC bouts but it has long been assumed Diaz and McGregor will settle the score once and for all with a decider inside the Octagon.

However, the American has just one fight left on his current UFC contract, and with McGregor currently out of action as he continues his rehabilitation from a broken leg, Tony Ferguson has been touted as his next opponent.

Josh Thomson believes when that contest is done, Diaz will then leave the company to negotiate a lucrative bout with YouTuber Paul.

"He's leaving the UFC, he's fighting Jake Paul. Just stop, OK," Thompson said on his Weighing In podcast. "This is his last fight, he's not fighting in the UFC anymore. He's going to leave and he's going to fight Jake Paul.

"He's just trying to get a fight to get out the door, he's done with MMA. He knows that fight is going to make him double than he'd make (against McGregor)."

Thomson, 43, beat Diaz back in 2013 and argued that McGregor, 33, is no longer a star attraction following back-to-back defeats by Dustin Poirier.

"Conor's not that draw anymore that he once was. Conor can't get out of his contract, he's on an eight- or ten-fight deal I believe.

Should Diaz fight Jake Paul over Conor McGregor? Let us know in the comments section.

"So he's stuck with the UFC forever. Speaking from a Nate point of view, I think Nate's going to leave and end up fighting Jake Paul in boxing."

Paul, 24, has won all of his four professional bouts so far, and has not been afraid to taunt, or take on, MMA fighters.

He's frequently goaded the likes of Diaz and Conor McGregor on social media, although is reportedly close to finalising a deal to fight Briton Tommy Fury in December.

A clash with Diaz, who ended a 17-month exile from the Octagon when he lost to Leon Edwards in June, would prove lucrative for both fighters.