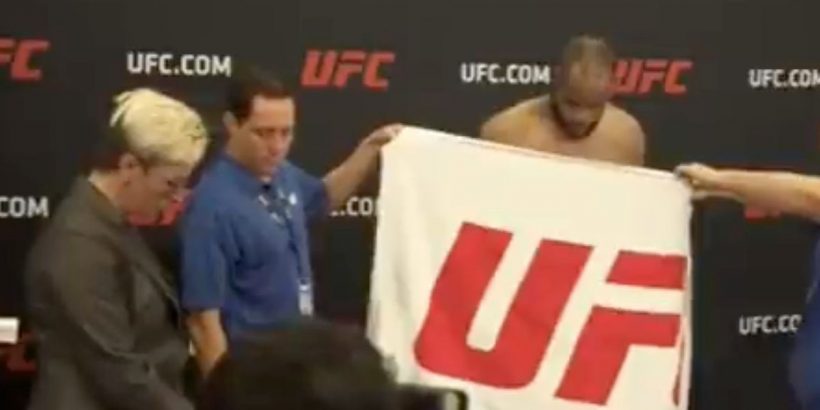 Tony Ferguson has taken a sensational shot at Daniel Cormier by accusing the former UFC two-weight champion of taking cocaine.

The two conducted a volatile interview before Ferguson's clash with Michael Chandler at UFC 274 last weekend. The bout ended with Ferguson, 38, needing hospital treatment after being KO'd by a savage front kick from Chandler.

The ill-feeling between the pair stems from Cormier, 43, being a teammate of Ferguson's long-time rival, former UFC lightweight champion Khabib Nurmagomedov. On three occasions 'El Cucuy' was scheduled to face the Russian maestro before he retired, but the fight was cancelled on each occasion.

Back in 2017, Cormier controversially weighed in for his UFC 210 rematch with Anthony Johnson by seemingly pushing down on a towel. It's a technique known to manipulate a scale into producing a lower weight reading, and raised serious questions over how 'DC' lost 1.2lbs in a matter of seconds.

On Twitter, Ferguson uploaded a clip of the incident, writing: "How not to make weight ladies and gentleman. Should have stripped him like they did Charles Oliveira. Shout out to all those doing it right and keeping the sport clean."

Cormier hit back with: "Tony please stop. Go and sit back for a little, tuck your head in a hole somewhere. Regroup man , recover spend some time with your family. Like just please stop! I plead with you. It is not a good look. Like you’re making me sad."

Is Tony Ferguson talking sense or still dazed from that Chandler KO? Let us know in the comments section.

It was then that Ferguson made his pointed accusation, writing: "Lay off the yay buddy, not a good look. You make yourself look sad. I’m already back to work, don't quit like you. Enjoy the retirement with fathead [Nurmagomedov],".

Cormier then threatened Ferguson with potential legal action over his words, adding: "Ok Tony now you’re reaching. Are you saying I do cocaine? I’m so confused right now. I don't know why you’re after me. Get Michael Chandler he’s the one kicked your face not me."

Former interim champion Ferguson has never missed weight in the UFC but the topic of weigh-ins is currently a divisive subject – after Charles Oliveira was stripped of his lightweight belt for missing weight before beating Justin Gaethje. The Brazilian claimed he made the 155-pound limit on the practice scale backstage, and appeared shocked when told he was half a pound too heavy.