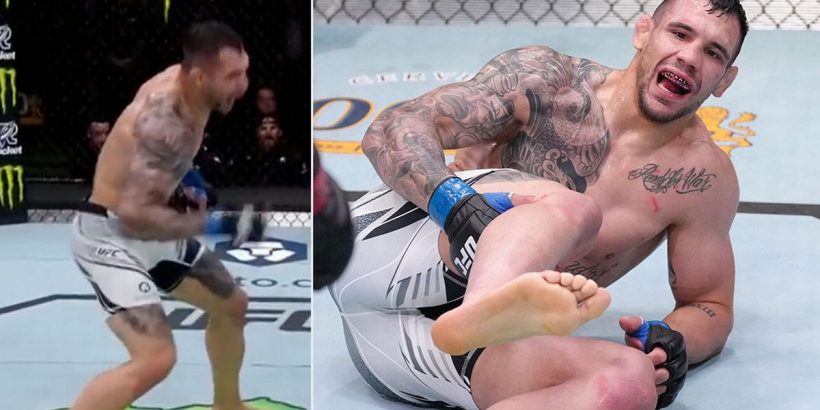 The right knee of Aleksandar Rakic went "pop" during his UFC Vegas 54 main event against former UFC Light Heavyweight Champion Jan Blachowicz in a sickening end to an exciting contest.

The Austrian-born Serbian brawler, 30, looked to be edging a feisty encounter inside the UFC Apex as the event entered the fourth of five scheduled rounds between the 205lb rivals.

Although both men opted to use leg kicks throughout the contest, it was a seemingly innocuous step back onto the right leg of the younger fighter that forced the referee to wave off the bout – with a replay showing the ligaments of Rakic snapping backwards under his skin.

Former UFC Bantamweight Champion Dominick Cruz said on commentary: "When you stop like that something bad has happened to your knee. You don't know what it is… but it's not good."

Adding: "What an awesome fight though man. It's sad that is how it goes down but this is what happens in practise a lot."

With former UFC Middleweight Champion Michael Bisping said before describing the injury as disgusting: "He's not moving, he's not getting up."

HAVE YOUR SAY! Who will be the next British UFC champion? Tell us in the comments section below

One fan wrote: "That was awful looking. Hate to see it end that way. Good fight up to that point."

With a second adding: "Knee, back, neck injuries always scared the s*** out of me with fighting man. I hope Rakic heals quickly."

A third said: "Wow…..you could actually see the ligament pop. Never saw that before on video."

Blachowicz, 39, said after the bout: "I am a fighter so I would like to win by submission or decision or knock him out, but it is what it is. I'm happy because I won the fight.

"I felt great inside the cage, I was ready for another round."

The Polish former champ was already ranked #1 in the division having only recently lost his belt to Glover Teixeira, and is in line for another title shot should the veteran beat Jiri Prochazka in June. Rakic remains #3 in the standings.